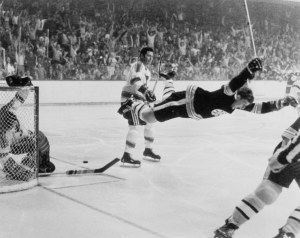 When I was just a boy, Hockey Fever swept Boston and Boston fell in love with Bobby Orr. My life, and the lives of hundreds of thousands of other hockey fans, would never be the same.

This “Fever” of which I speak happened in the late 1960s and coincided with the arrival in Boston of a young man named Bobby Orr who would begin a seven-year, injury-shortened love affair between fans and one extremely talented athlete.

If you lived in the Boston area in the late 1960s, Bobby Orr was akin to the second coming. The blond skating and scoring sensation grew up in Parry Sound, Ontario (about 2 hours north of Toronto and, what seems on the map like a million miles away from Boston.) It is said that Boston Bruins scouts were on a trip to Canada to check out a couple of other players when they happened to spot Orr and decided that day that he would someday wear a Boston Bruins jersey. After courting the Orr family for about a year, the Bruins organization did just that. They convinced 14-year-old Bobby and his parents (especially a reluctant, protective mother) to sign on the dotted line in the kitchen of an ugly old home next to the railroad tracks, not far from the frozen rivers and ponds on which Orr had been skating and playing “shinny” hockey for the previous 10 years.

If the Bruins front office could have had their way, they probably would have had Orr playing for the franchise team in Boston the next night, but in the NHL you had to be 18 to play in the big leagues, so Orr played for several years on the minor league Oshawa Generals, a mere child competing against players much older than he was.

Finally, at the ripe old age of 18, with the eyes of an entire city on him (the hype was incredible), Bobby Orr arrived in Boston. And not long after that, with the acquisition of several other great players including a scoring machine named Phil Esposito, the Boston Bruins were suddenly a contender for the Stanley Cup and Bobby Orr became my full-time obsession.

My bedroom walls were covered with Bobby Orr posters and articles I had read over and over about the young superstar. Orr seemed to have it all. He had winning good looks, a gentlemanly, shy manner, and, most impressively, he could skate circles around every other player in the league. My uncle was a Boston Police lieutenant and he would often be assigned to details at Boston Garden which meant that he would allow my father, also a huge hockey fan, and I to walk past the press gates. We didn’t have seats and often had to stand behind the last row of the first balcony inside the old Boston Garden, and occasionally old eagle eye, yours truly, would spot a pair of open seats and drag my dad to go sit in them. And sometimes we didn’t get kicked out.

But whether I was watching the Bruins play in person or on television, my eyes were transfixed on Orr. He was so fast and had so many different moves, faking and deking the opposition out of position to line up a slapshot from the point. I didn’t know it at the time, but I was watching a man who literally changed the way the game was played. Orr turned hockey from a defensive game into an offensive one and it was great to watch. Orr was so good his first year in the league that he won the NHL Rookie of the Year award. But he also hurt his knee that first year, suffering an injury that would limit both his playing time and shorten his career.

But nobody was thinking about Orr’s knee injury on May 10, 1970. It was a warm, spring day in Boston and about 50 of my relatives gathered at my Aunt Babe’s house (yes, Babe was really her nickname) where we witnessed what everyone agrees is the most incredible and famous goal in hockey history. The Bruins were up 3 games to none against the St. Louis Blues in the finals of the Stanley Cup Playoffs. Boston hadn’t won a Stanley Cup championship since 1941, some 29 years earlier.

When the game went into overtime, the tension grew. Thinking back to that day, it seemed like we all knew what was about to happen. Just 40 seconds into overtime, Boston Bruin player Derek Sanderson, who was standing just behind the opposing net, passed the puck to a streaking Bobby Orr. Orr shot the puck between Blues goalie Glenn Hall’s pads to win the game and the championship. A millisecond after the shot, as Orr skated away with his arms and hockey stick raised to mark the win, he was upended by an opposing player. Bobby Orr went into flight and for a second seemed truly superhuman. The picture of Orr flying through the air is planted in my mind as firmly as anything else from my childhood. Needless to say, the entire living room at my Aunt Babe’s erupted in celebration, as did the city of Boston for the next three or four days. It was truly something else. A young boy’s dream had come true.

A few years later my father told me that he was taking me to Toronto during summer vacation. There we would see the Hockey Hall of Fame, do some other sightseeing and possibly make the trip in our rental car to Parry Sound, Ontario, to see the town where Bobby Orr came from.

On our way to Parry Sound we stopped at Orr’s hockey camp. Orr was there and I was thrilled when he autographed a magazine and posed for a photo. Meanwhile, my always gregarious father introduced himself to Bobby Orr’s father, Doug, and the two men began talking. My dad mentioned that we were going to be visiting Parry Sound, and Doug Orr invited us to stop by the house. Let me repeat that. Bobby Orr’s father invited us to stop by the house. When I found out, I couldn’t believe it. Things became even more surreal after we got to the Orr household, were warmly greeted (Bobby wasn’t there) and given a tour of the basement where the family kept a trophy case, which must have been at least 25 feet long, filled with trophies and pucks and other mementos. Before we left, Doug Orr gave us a couple of Bobby Orr coffee mugs, “gifts from the Orrs.” Over the years, one was broken (knocked off the wall during puck shooting practice in my cellar), but I still have the other one. My most prized possession!

Years went by, and I remained a huge fan of Bobby Orr. I even started to play the game. When Orr was forced to retire because of his injured knee, my heart was broken, and when they paid tribute to him and retired his number at the old Garden, I wept along with thousands of other Bostonians.

Bobby Orr was, in my opinion, the greatest hockey player who ever played the game. The images of him skating the length of the ice and scoring goals are forever etched in my memory.

He was my hero.

Filed under My Stories, Sports