Win Win is a victorious little film that wrestles with some of life’s unexpected twists and turns. It’s a humble but lovable little lesson of how we unknowingly entangled ourselves and the difficulty of finding a way to straighten things out.

At first glance at the promotional poster, one might think that this is just another cliche high school sports stories like the formulaic and overrated The Blind Side, and dozens of others just like it. And without fine acting performances by Paul Giamatti, Amy Ryan (Holly from The Office), and nifty newcomer Alex Shaffer, this movie could easily have descended into that same mold. But instead, Director Thomas McCarthy (who also directed The Station Agent and The Visitor) has created a quirky and ultimately uplifting tale about a not-so-nuclear family simply trying to make it through the trials and tribulations of modern life. Win Win is a movie that refuses to run away from the betrayals and complications that every family must tackle. And the ultimate redemption that these characters find is won not with the typical bravura of most sports films, but with simple, straightforward solutions.

Paul Giamatti plays a middle-age attorney, husband and father of two daughters struggling to pay the bills and keep the wolf from the door. By day, he’s working various cases in court. At night, he moonlights on another kind of court as the coach a losing high school wrestling team. The problems begin when Giamatti’s character attempts a sly move. He’s presented with the opportunity to bring in some badly needed cash by caring for an elderly gentleman (played with gusto and by Burt Young of Rocky fame) who is clearly incapable of caring for himself. So the coach agrees to become his guardian, and eventually places him an assisted care home.

All seems to be fine until the appearance on his doorstep one day of a slightly strange, teen named Kyle complete with bleached white hair looking for his grandfather. The teen, played by newcomer Alex Shaffer, is adrift in the world, while his mother remains in rehab for substance abuse problems. Oh, what a tangled web the coach has weaved, especially when the mother appears, demanding her son along with custody of her father and the money that Giamatti’s character was pocketing. Meanwhile, Giamatti’s Coach Flaherty has discovered that Kyle is, among other things, an exceptionally talented wrestler, who could carry his entire team to victory.

More complications ensue when Kyle disappears, and Coach Flaherty’s elderly charge decides that there really is no place like home. Giamatti is pitch perfect as a guy who is just trying so darn hard to do the right thing and always ending up doing the wrong thing. But in the end, while Kyle leads his wresting team to victory, a solution is found and the film ends in an uplifting manner.

Win Win may not win any awards for greatness, but if you’re looking for a film that will warm and cheer you up while we wait for the long overdue Spring you could do a heck of a lot worse.

“Restrepo” – Life In The Most Dangerous Place In The World 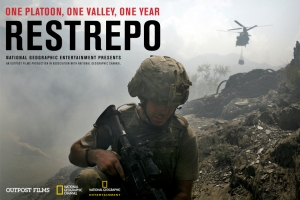 Intense. That’s the best word I can use to describe the film, “Restrepo,” about a company of U.S. soldiers places into a valley in Afghanistan, called the “most dangerous spot in the entire world”

I just saw the movie today and I don’t have the time for a full review. Plus I probably need a day or so to digest what I just saw. So here’s a trailer for the film and I’ll have a complete review for you tomorrow.

Have a fun and peaceful rest of your day.