Lazy and slow days and hot fun in the summertime. Things are moving slowly here in the Detroit Rock City.

Time for long days and sensational sunsets around 8:30 in the evening. Some of them are absolutely breathtaking out of the window of my 21st floor apartment overlooking the Detroit River.

There are a couple of fairly large “party boats” that cruise up and down the Detroit River at night. When they are all lit up they look like a piece of the city, brighter than the real city, has broken off and is drifting down river. There’s a walkway along the river and sometimes Janet and I walk along while the humid summer air is cut by a pleasant river breeze. We hold hands and try to enjoy our days in Detroit.

Meanwhile, life rolls by in the Motor City.

Every year they have a weeklong event just outside Detroit called the Woodward Dream Cruise. Literally millions of people gather, many of them camped alongside this long stretch of road called Woodward Avene which runs from Detroit far out into the suburbs. The other night we got caught up in a bit of the traffic from this automobile parade, with every imaginable form of vehicle from the Model T to modern day race cars in the slowest imaginable progression up and down both sides of Woodward. It’s a great symbol of pride for this section of the country where the automobile was, for so long, dominant.

We found ourselves among the car enthusiasts on our way home from the film, “Inception.” We don’t usually go to see these big Hollywood, multi-million dollar blockbusters, preferring instead to see whatever Independent film stops by at one of the two nearby film art houses. But since there was no great alternative there, we laid our $10.50 apiece down to see “Inception.” Please don’t ask me to review it or even attempt to summarize what it is about. Let’s just say it had a lot to do with folks who go around trying to implant ideas into other people’s heads while they are asleep. Which, interestingly enough, is basically how films get made in Hollywood these days.

Most of all these are the dog days of summer, these final days of August when vacations begin to come to an end and people grab at what remains of their summer days. Personally I look forward to autumn, with memories of the indescribably beauty of the changing of the colors of leaves and the cooler days fall brings. 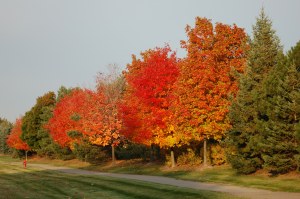 Most of all the changing leaves brings a reminder that cooler days are coming, and it is almost time for the Detroit Red Wings to lace ’em up again here in HockeyTown, USA.

And that, my friends, is always a good thing.

Filed under Life In Detroit, My Stories, Sports

One response to “Summertime Slippin’ Away”