Bruce Springsteen And Me On The Streets of Philadelphia

September 19, 1988. A warm autumn day and cool night that I will never forget. It was my first real close encounter with Bruce Springsteen. And it all took place during the Human Rights Now! tour stop in the city of Philadelphia.

I was working for a radio station just outside Boston and it was a big enough radio station to secure me press credentials for the Human Rights Now – Amnesty International tour stop in the city of brotherly love, about eight hour train ride from Boston. 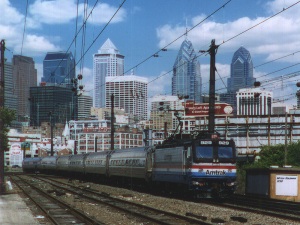 I have relatives who live outside Philadelphia with whom I spent an evening. The next morning I took commuter train downtown and found my way to the Four Seasons Hotel in downtown Phlly. That would be the location of an early afternoon Amnesty International press conference and with nothing else to do, I made sure to get there nice and early.

In fact, I was one of just a few folks on the second floor lobby of an over-sized ballroom when I arrived around 10:00 a.m. Indeed it was quite fortuitous that I was there so early, as I would end up with a seat in the front row in that big old ballroom, which by the time the press conference began would be packed to the rafters. But not quite yet.

I had been looking forward to this day in September for quite some time, not only because it would be the occasion of a monumental, historic concert, but perhaps even more importantly because I was a card-carrying member of Amnesty International. Meaning that I believed fervently in their mission and had pledged to do what I could to advance their cause.

I was also excited because I has passes to the pre-concert press conference. And there was an extremely slim chance that I might be able to ask, Bruce Springsteen, my favorite Rock and Roll musician a question at the press conference.

Once arrived I was offered a cold, refreshing glass of orange juice and I showed the kind Amnesty International hosts the credentials from my radio station. They checked off my name and gave me a bevy of press passes, stickers and lanyards, as well as a concert ticket for that night and some reading material in the form of a huge pamphlet about Amnesty International and the Human Rights Now!

A brief time later, they opened the doors to the ballroom where the press conference would take place. There was an long table at one end of the ballroom where the Amnesty International organizers and concert performers would “meet the press.” The only slight problem problem was that nobody had placed name tags on this monster of a table, so I had to guess where to possibly get a chance to ask Bruce a question. Not an easy task considering the length of the table, but as you’ll see, luck was on my side.

Then came The Long Wait. It seemed like days, but it was probably three or four hours. During this time I had an opportunity to read the material I was given three of four times over, get to know a very nice young lady who was seated to my left. She was very sweet. Eventually it was time for the press conference to begin and I was shocked when I looked behind me to see the room filled to capacity, but also were more still and television cameras than I had ever seen in once place before. It reminded me of Sting’s line, “Too many cameras and not enough food.” I felt like the whole world would be watching. Imagine this and multiply it by fifty.

Finally all the Amnesty organizers and performers filed into the room single file to bits of applause. Bring up the rear of the parade were Peter Gabriel, Sting and Bruce. 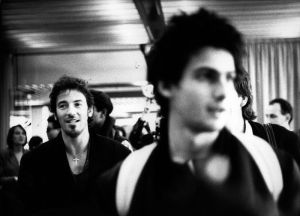 You can imagine my delight and Bruce proceeded to sit directly in front of me, with Sting and Peter Gabriel to his immediate left. Now I had been to my share of Bruce Springsteen concerts in my life and once of twice I had been fairly close to the stage, but this was the closest I had ever been to the man, Bruce Springsteen. If you’re a fan and never been up close and personal, I can only say it is a surreal feeling. However, I tried to remain cool, especially since I was on assignment as a journalist and I did my best to listen and not stare at Mr. Springsteen, who looked like he was still shaking the cobwebs out just five feet away. You think it’s easy? Try it sometime.

But seriously the press conference was both very informational and inspiring; each person at the table introduced themselves and talked about why they were involved. There were tragic stories of Human Rights abuses around the world as well as heroic stories of those individuals who had dedicated their lives to expose and eradicate these kinds of abuses. There were videos shown. And everybody at this long table formally signed a Declaration of Human Rights, in show of their solidarity to this cause.

Then it was time for questions from reporters. I really hoped to ask Bruce a question and now that I was so close, my odds had improved three fold. I had three good ones prepared, just in case somebody else beat me and asked one of my questions before I could. The tension mounted.

I was about to raise my hand, grab a nearby microphone and with hundreds of people watching, listening and taking notes (not to mention all those cameras) ask my personal hero a question. I had no idea whether I would sound like Daffy Duck or Minnie Mouse when I opened my mouth, or if I would lose my nerve completely. But I had the advantage of being in the front row. (Tip to young reporters: Try to always sit in the front seat.) So up went my arm and I was called on and handed a microphone. I had to say my name and where I was from and address the question to a particular person. So with slightly shaking voice I said:

“Bruce, you’ve played some incredibly emotionally moving concerts over the years. Looking back, how do these Human Rights Now shows compare to all of those others over the years?”

Bruce looked at me, gave me a brief obligatory answer, then paused a bit, shifting in his seat. And then he really got into a more sustained answer, giving examples of some of the really incredible moments on the tour to date and saying that on several occasions he was moved to tears during performances. I could be wrong but I think he intuitively knew that I was hoping for a good long answer, not just a short three word response, and he delivered. What a guy.

The rest of the press conference was a blur, except I remember going up to Bruce Springsteen when it was over. Bruce was gathering up some papers and I asked him if he would sign my Declaration of Human Rights pocket book, which he did, and then I shook his hand thanking him for his music. Bruce looked up, signed a few more autographs, and softly said, “I gotta get outta here.” And then did.

As I tell everyone who I tell this story to the concert that night at the now demolished JFK stadium in Philly was icing on the cake. It was a gigantic place and as the crowd trickled in I knew it was going to be a night to remember.

When he hit the stage Bruce Springsteen was absolutely on fire, but that was no real surprise to anyone. 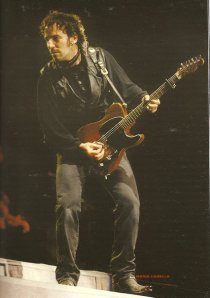 Bruce and the band delivered what one critic called, “a scorching set of music,” with Springsteen pulling the song “Jungleland” out of his hat, after a long absence from his sets. Max later said that he wishes he had a picture of Clarence’s face when Bruce called for that song. Sting took a verse of “The River,” with David Sancious on keyboards, a mini-reunion of sorts. Nobody could have know that night in JFK stadium that these Human Rights Now! shows would be the last shows Bruce Springsteen and The E Streeters would play for more than a decade.

And at the end of the concert, the headlining musicians performed an rendition of “Get Up, Stand Up.”

And we did. We got up, straggled home exhausted but inspired, and many of us that were there that night, myself included, continue to fight for Human Rights for everyone, now!

I hope that having heard this story, you will too.

Filed under Music, My Stories